Cardinal Resources Subranum Limited (“Cardinal Subranum”) a Ghanaian registered Company and a wholly owned subsidiary of Cardinal, has entered into a Sale and Purchase agreement with Newmont Ghana Gold Limited (a subsidiary of Newmont Mining Corporation) for the purchase of Subin Kasu Prospecting Licence (the “Subranum Project”).

Subject to the approval of the sale by the relevant Minister for the Ghanaian Minning Act, Cardinal Subranum will acquire 100% of the Subin Kasu Prospecting Licence and pay to Newmont Ghana Gold Limited US$50,000 on or before 10 days after the approval date, US$50,000 on the first anniversary of the approval date and a final $100,000 on the second anniversary date. In addition Cardinal Subranum will be required to spend US$250,000 on exploration within the first year from approval and a further US$750,000 in the second year.

Location and geology of the Subranum Project

The single tenement in the Subranum Project covers an area of 68.7 km2 and is situated in the Sefwi-Bibiani greenstone belt in south western Ghana, and is proximal to the currently producing Bibiani and Chirano mines. Bibiani has produced over 3.8 million oz Au since its discovery in 1902, from a mixture of open pit and underground mining methods. Current owner, Noble Mineral Resources Pty Ltd, recently completed its first gold pour in March 2012 from a re-furbished 2.7 Mtpa mill.

The Chirano gold mine operated by Kinross Mining Corporation, proximal to the Bibiani mine, produced in excess of 260,000 oz (equivalent) Au in 2011.

Despite the existence of these large discoveries and the extensive history of gold production in the area, the remainder of the Sefwi-Bibiani greenstone belt remains comparatively under-developed. Similar to the Bolgatanga Project, exploration of the Subranum Project will be targeting structurally controlled greenstone belt deposits, comprising fault and shear hosted veins contained within intermediate volcaniclastic rocks and felsic intrusives. 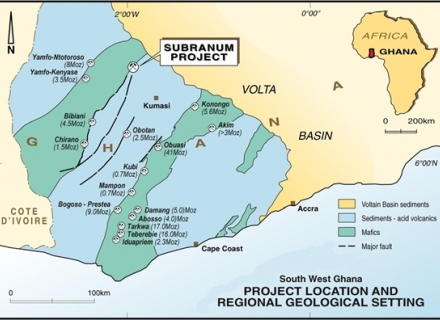 Stay up to date with company and project news. View our latest investor’s update.

Stay up to date with company and project news!